WE ARE THE KNIGHTS WHO SAY …. NEE! 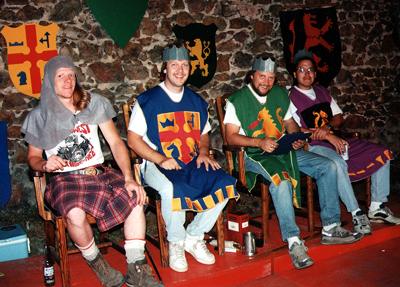 The 'Knights of Nee' is a social club for adults who, at least in their own minds, refuse to grow up. The name was derived from a very silly scene found in Monty Python's classic movie 'The Holy Grail'. In this scene, King Arthur and his men are ambushed by a group of forest dwelling warriors known as the 'Knights who say Ni!" Fearing certain death, King Arthur and his men must appease the Knights of Ni with an offering before they may pass safely through the forest. The offering turns out to be …. A shrubbery! ("A nice one too. Not too expensive. One with lots of Laurels in it"). Monty Pythons Knights of Ni epitomize our philosophy which is: people put on airs and masks to command a certain presence when in fact if you look deeper into their soul you'll find a silly little kid who wishes they didn't have to grow up. This underlying philosophy was the cornerstone of a paintball team whose history began in 1986 at North West Flag Adventures in Vancouver, BC, Canada. As the group got older paintball became less and less of a focus for the Knights of Nee. For the last seven years, new members have been comprised of the spouses and friends of existing Knights however, the club is open to nearly everyone who believes in being a kid again. Initiates come from all ages (so far from 12 to 60) and from as far away as Germany, New York, Ontario, California, and Hawaii. The club is now entering its 15th year and has over 450 members world-wide!

Each year approximately 150 Knights and SCUM make a pilgrimage to Princeton Castle to see their humble Kings and to enjoy the fun and festivities known as 'Princeton Initiations!' Princeton Initiations are the official rite of Scum being transformed into brave and noble Knights. Contrary to what you may be thinking or even what other Knights may tell you, the initiations are designed to be exciting, entertaining and terribly fun. Most initiations involve member wannabe's participating in game show type activities or making something to honour their Kings. Everyone dresses in self-proclaimed costumes which resemble the character that you see yourself as, and consequently, are not necessarily medieval based. In fact, members even decorate their campsites with castle walls and such in the hopes of winning one of many prizes available.

The Initiations are held at a campground in Princeton, BC, Canada (3 hours from Vancouver) and each year the Princeton Committee spends 10 months on planning your weekend of insanely memorably fun. The weekends activities include: a parade, go cart races, paintball, a children's activity centre, gambling Serve-Atude bucks in the Monks Casino, backrubs in the Nymphs pleasure palace, a talent contest, a popular board game whereby the pieces on the board are real Knights wielding whipping cream pies, river rafting, singing and much merry making. 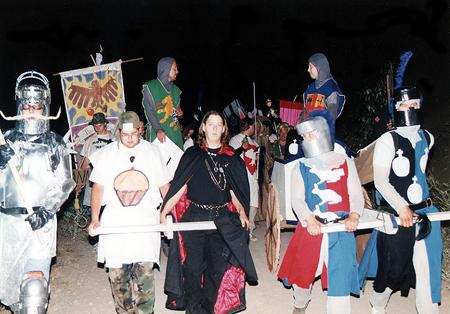 Do you get the picture? Does this sound like the most fun you've ever heard of? If so, why not join us this year at Princeton '99? We love making new friends and the Kings have proclaimed that all are welcome!

Hope to see you soon. Got any great initiation ideas? Tell us!

You are one of

silly persons to visit this page!